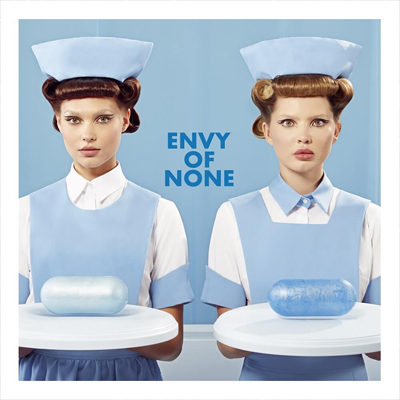 The hand of fate works in mysterious ways. When singer Maiah Wynne entered a talent contest, little did she know that it would spark off a chain of events that would lead her to recording with internationally-renowned artists, including a “Rock and Roll Hall of Fame” guitarist. One of the prizes was a mentoring session with music industry professionals, including Andy Curran of Coney Hatch. Wynne won the contest, and as Curran bestowed the pearls of his wisdom to her, she cheekily suggested they write some songs together, and ‘Shadow’ was the first fruits of their union.

Curran, being genuinely excited by his discovery, contacted a couple of his friends, engineer and multi-instrumentalist Alfio Annibalini, and a certain guitarist by the name of Alex Lifeson; both could see the potential... and Envy Of None was born.

The easy option for Lifeson, and Curran in particular, would have been to head down some sort of hybrid Rush/Coney Hatch avenue, but as seasoned veterans the creative itch took them into previously unchartered waters, and it is this very fact that makes Envy Of None such a compelling listen. There`s no towering anthems akin to ‘Don`t Say Make Me’, and no Prog elements referencing ‘2112’; nothing at all would lead you to think that members of said bands were involved in the creation of Envy Of None. Instead, there`s a wonderful, dark electronic undercurrent with Gothic and Industrial elements which weave together in hypnotic, tantalising layers.

Opener ‘Never Said I Love You’, with its bubbling synth line, and ‘Liar’ have hooks to draw you in immediately, while ‘Dog`s Life’ and ‘Kabul Blues’ take repeated listens to reveal their glories as Wynne`s beautiful voice is a revelation. Indeed, it is Wynne who stands proudly centre stage throughout the album, with Annibalini, Curran and Lifeson using their extensive experience to lay the foundations, thus allowing her haunting vocals to shine. That`s not to say Lifeson hides his guitar work under a bushel; yes, it is taking more of a supporting role, but his solo on ‘Spyhouse’ is classic Lifeson, and will keep the purists happy. The sparse instrumental ‘Western Sunset’ is a truly beautiful tribute to his old friend Neil Peart.

This may not be Rush or Coney Hatch, or sound anything like them. This is Envy Of None, and it marks the start of what could be an exciting musical journey.