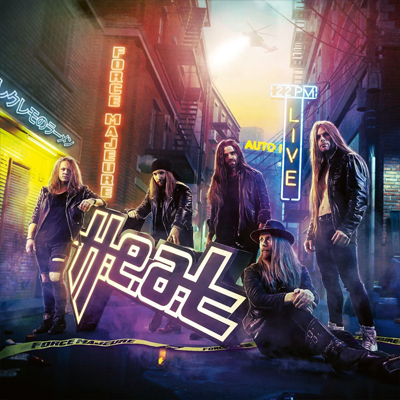 I will readily admit I was gutted when I heard that vocalist Erik Grönwall was leaving Swedish Melodic Rock superstars H.e.a.t, for I believe his appointment in 2010 was an instrumental factor in turning a good band into one of the greatest and most important Melodic Rock bands ever; not that I didn’t enjoy the first two H.e.a.t albums, but their Grönwall-fronted output took them to undisputable new heights, let alone his inimitable talents as a frontman as well as vocalist. However, there really is only one person that should replace Grönwall, and it’s destiny that H.e.a.t should come full circle and turn to their original vocalist; Kenny Leckremo.

Leckremo had all but vanished from the music scene following his H.e.a.t departure, until he returned with his well-received solo effort ‘Spectra’ in 2018 and sporting a new image. He’s slotted back in seamlessly and sounds amazing, while guitarist Dave Dalone in particular is in inspired form, letting rip with some amazing soloing throughout.

Previous album ‘II’ was so-called as “this is what we would sound like if we made a debut album in 2019”, so stylistically album #7 ‘Force Majeure’ picks up where ‘II’ left off; or in essence is the natural follow-up to ‘Freedom Rock’, Leckremo’s last effort with H.e.a.t, as if the Grönwall era never happened. Put simply, there’s none of the Pop or experimental influences of ‘Into The Great Unknown’, this is more of the straight-ahead Melodic Rock with which H.e.a.t made their name – and it’s brilliant.

First two singles ‘Nationwide’ and ‘Back To The Rhythm’ are the perfect introduction to ‘Force Majeure’, while ‘Not For Sale’, ‘Hold Your Fire’, the pomp- tinged ‘Paramount’ and the quite brilliant ‘Hollywood’ also prove that the band’s natural talent for creating the perfect Melodic Rock anthem remains undiminished.

‘One Of Us’ is the requisite power ballad, and it’s a belter with its subtle orchestration, ‘Harder To Breathe’ and sublime ‘Wings Of An Aeroplane’ lean towards the slicker, mid-tempo numbers these guys do so well, while at the other end of the spectrum is the rampant ‘Demon Eyes’, which sees keyboardist Jona Tee flirting with the Power Metal sound of his New Horizon project, but still very much with those irresistible H.e.a.t melodies.

What more can I say? The third era of H.e.a.t is here, and as the title ‘Force Majeure’ demonstrates they are indeed a greater force; magnificent!