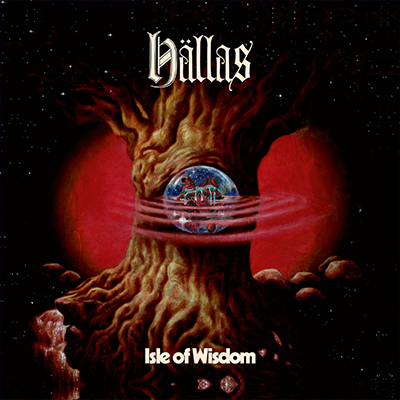 This is my first encounter with this Swedish quintet, albeit it’s their third album, and what’s on offer here gave me a considerable frisson of nostalgia as they weave a sound that has a decidedly and unashamedly seventies vibe, right down to the production values.

The organ playing on opening track ‘Birth Into Darkness’ has a Camel feel in places, but also leans towards the sound used by fellow Swedes Beardfish at times; indeed, Beardfish isn’t a bad comparison for Hällas in terms of sound, if not melodies and complexity. The use of organ is prominent across the album, as it underpins pretty much everything.

‘Advent Of Dawn’ is a pacey number; if you’re into lyrics, then you’re going to struggle, as I have, on this track without a lyric sheet, as most of Tommy Alexandersson’s words are unintelligible. Regrettably, this is the case with much of the album. ‘Earl’s Theme’ slows things a little, with a nice dual guitar intro from Alexander Moraitis and Marcus Petersson, which gives it an early Thin Lizzy vibe. Again, this style crops up from time to time over the eight tracks, while some of the synth motifs on this particular song are redolent of Rick Wakeman; that, combined with the less urgent approach, makes it the album’s standout track.

Following number, ‘The Inner Chamber’, also adopts a less fervent approach, albeit it builds over its near seven-minute duration; it’s given a Gentle Giant feel mid-song, thanks to certain keyboard sounds. ‘Gallivants (Of Space)’ features some tasty retro synth breaks from Niklas Malmqvist, before there’s a restrained section, which then bursts into a florid guitar solo. ‘Stygian Depths’ chugs along and features some more busy guitar soloing. To add to the retro feel, the closing track ‘The Wind Carries The World’ seems to feature the sound of an electric piano; now, that’s nostalgia for those of us of a certain age.

An interesting album which has grown on me over time.