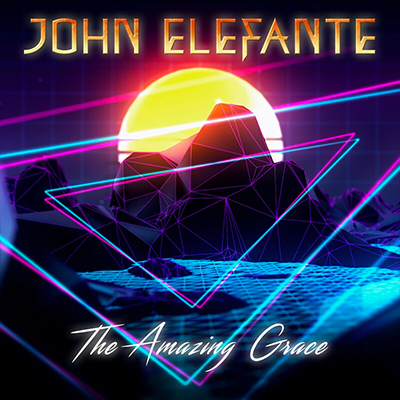 We all know John Elefante from his solo work, then with the band Mastodon where he was partnered with his brother Dino Elefante, and especially from his tenure in Prog Legends Kansas. However, what we didn’t know is that without Frank Boxberger, who plays guitar and helped co-write most of this new CD, this album would probably have never been made (see interview). John Elefante had basically decided that if he didn’t make another album, his last coming out almost fourteen years ago, it wouldn’t bother him that much. However, persuaded he was and thanks to Escape Music we now have the wonderful comeback album ‘The Amazing Grace’ to enjoy. Let me state here that there are Christian sentiments running through the lyrics, but as John told me himself, he never beats fans to death with them, instead he writes and sings about things and subjects that matter to him and how his spiritual life informs these feelings.

So has a fourteen-year gap for John Elefante diminished his talents as a writer and performer? Far from it; in fact this superb, grown up AOR album will have fans of the man’s previous work slavering rabidly. ‘City Of Grace’ and ‘Stronger Now’ open the album beautifully. ‘City...’ is a brooding slow building track with wonderful harmony vocal passages that sets the tone for this fine album, and ‘Stronger...’ shows why John is still regarded as one of the best singers in the business. Title track ‘The Amazing Grace’ tells of loss, love and redemption and again Elefante shines. Three songs I know the Fireworks faithful will love are ‘Won’t Fade Away’, ‘Time Machine’ and ‘You’re Not Alone’ which feature violinist Chris Carmichael who gives each of these superb songs a distinct early Kansas feel. Personal album favourite is ‘We Will Be Fine’, a song all about hope that tells you that no matter what life throws at you, you will be okay.

The good news, apart from the fact that this is a fantastic AOR record that fans of John Elefante have been waiting for quite some time now, is that this looks like it’s just the start of more music to come, and if it’s only half as good as this album then we’re all in for one hell of a musical treat.