Ken Roberts takes a retrospective look at the eighteen-album catalogue of one of the founders of the American jam band scene. A legendary live act, The Allman Brothers Band has filled The Beacon Theatre in New York City over 230 times.

The Allman Brothers Band, an American Rock band, where formed in Jacksonville, Florida in March 1969 by brothers Duane Allman (slide and lead guitar) and Gregg Allman (vocals, keyboards), along with Dickey Betts (lead guitar, vocals), Berry Oakley (bass), Butch Trucks (drums), and Jai Johanny "Jaimoe" Johanson (drums, percussion). The twin guitar and drum set up very much set the scene for what was to follow. Duane and Gregg had already played together in three previous bands, The Escorts, The Allman Joys and Hour Glass. The band is sadly surrounded by a number of tragedies, the first of which was when Duane and Gregg’s father was murdered, when they were just three and two years old respectively.

They were then brought up by their mother, who had to send the boys to a Military Academy whilst she trained as an accountant in order to support her family. Gregg was the first to show a musical interest and bought himself a guitar, when he was just 12 years old. However, it was Duane who showed more interest and would often take his brother’s guitar off him after a fight and would then play it right-handed, even though he was left-handed. Duane soon sold his motorcycle and bought himself his own guitar, then shortly afterwards his mother bought him a Gibson Les Paul Junior. Whilst they were living in Nashville, Tennessee, they went to watch B.B. King play and the mould was set for them both… Duane in particular really wanted to emulate his hero.

In the early 60s the two boys formed The Allman Joys and later Hour Glass. Hour Glass recorded two albums; however, the record label wanted them to be a Pop band, whereas the band wanted to be a Blues band so they broke up.

In 1968 Duane fell off a horse and hurt his left elbow, as a result Gregg bought him Taj Mahal’s debut album and a bottle of Coricidin pills for his birthday. Duane immediately emptied the pills out of the bottle, washed the label off it and used it to emulate the slide guitar playing on the track ‘Statesboro Blues’, off that album. This became his go to device when playing slide guitar.

Duane had become the primary session guitarist at the Muscle Shoals studio and recorded with many artists including Aretha Franklin, King Curtis and Wilson Pickett. It was Duane’s solo at the very end of Pickett’s cover of ‘Hey Jude’ that finally made people notice him and gave him the break he needed; the music world sat up and wanted to know who he was. During Duane’s time at Muscle Shoals he paid a visit to Jacksonville, Florida and started to jam with Berry Oakley, Dickey Betts and Jaimoe Johanson, Gregg soon came back from California, and this was the embryo that eventually became The Allman Brothers Band in 1969.

Phil Walden, the manager of the late Otis Redding, had established the Capricorn Records label and recording studios in Macon, Georgia and wanted to expand from R&B into Rock. Early in 1970 when Walden and Jerry Wexler of Atlantic Records were offered the first tracks laid down by The Allman Brothers Band, they jumped at the chance. Walden convinced the band to relocate to Macon, Georgia as he immediately realized their potential with their heady blend of Blues, Jazz and Country music.

Initially the band lived in in apartments on College Road, which was named The Hippie Crash Pad, before moving into a larger house which became known as The Big House. It is now a museum immortalizing the band and contains many of their personal artefacts… a must see when you visit Macon! Later on they also rented Idlewild South, a wooden hut in the local forest as a rehearsal location.

The six band members and a number of their friends, such as Joseph ‘Red Dog’ Campbell, Mike Callaghan and Twiggs Lyndon hung out constantly. They often were to be found in Rose Hill Cemetery after consuming psychedelic drugs and writing songs, this location was the inspiration for classic songs such as ‘Little Martha’ and ‘In Memory Of Elizabeth Reed’.

They started to tour extensively, playing over 300 shows in 1970, traveling mainly in their Winnebago named ‘The Wind Bag’. Their first two albums – ‘The Allman Brothers Band’ and ‘Idlewild South’ – really did not sell well at all; however they were starting to draw larger and larger crowds at their live shows. Eric Clapton went to watch them and immediately fell in love with Duane’s slide guitar playing, they quickly became close friends. Duane appeared on ‘Layla And Other Assorted Love Songs’ by Derek And The Dominoes. Clapton wanted Duane to join the band; however Duane decided to stay with The Brothers.

In July 1971 they released what many people consider to be the greatest live album of all time, ‘At Fillmore East’. It was recorded over three nights at The Fillmore East in New York under the stewardship of Bill Graham. This double album, which was sold for the same price as a single record, eventually went platinum and changed the band’s fortunes forever. The front cover features a photo of the band and the rear cover a photo of their legendary road crew, who at this time earned as much in wages as the actual band members. The stories of their excesses are legendary.

Then in October 1971 several of the band and their crew checked into hospital for rehabilitation as a result of their heroin addictions. Later that month, on the 29th, Duane was tragically killed in a motorcycle accident in Macon, Georgia… he was only 24, but had left a legacy like none other before him.

The band decided to complete ‘Eat A Peach’ just two months after Duane’s passing, it was a double album with a heady mix of live and studio songs. Unbelievably lightning struck twice on November 11th 1972 when Berry Oakley was also tragically killed in a motorcycle accident, just three blocks away from where Duane had his accident.

In 1973 Lamar Williams (bass) and Chuck Leavell (keyboards) joined the band; however as they played to larger and larger crowds, the alcohol and drug problems became worse and there were often physical fights backstage. It was no real surprise when they spilt up in 1976. At this point most of the band hated Gregg Allman because he took a deal to turn State’s Evidence and testified in the court case against their security guy, Scooter Herring, a case which related to conspiracy to distribute cocaine. Herring was found guilty, but later on received a Presidential pardon.

They reformed in 1979 and released three studio albums in the next nine years, before splitting up yet again in 1988. However they reformed once more to celebrate their twentieth anniversary in 1989, adding Warren Haynes (guitar, slide guitar, vocals), Johnny Neal (keyboards) and Allen Woody (bass) to the line-up. They quickly released a couple of studio albums, followed by ‘Where It All Begins’, which was recorded live but with no audience. In 1995 they were inducted into the Rock and Roll Hall of Fame; sadly Gregg was so inebriated that he messed up his acceptance speech. Over the following years the band members changed on a number of occasions, however their live shows were held in great regard and fans would follow them all over America, with their shows selling out night after night.

On October 28th 2014 the band played their final show, the 238th consecutive time they had sold out The Beacon Theater in New York City.

Sadly in 2017 Butch Trucks died from a self-inflicted gunshot wound and Gregg Allman died as a result of his liver cancer. Duane, Gregg, Butch and Berry are all buried in The Allman Brothers Band plot in Rose Hill cemetery along with some of their family.

In summary it should be said that their live shows featured jam band-style improvisation and instrumentals, with a mixture of Blues classics and their own songs. If you were ever lucky enough to see them perform you would understand. 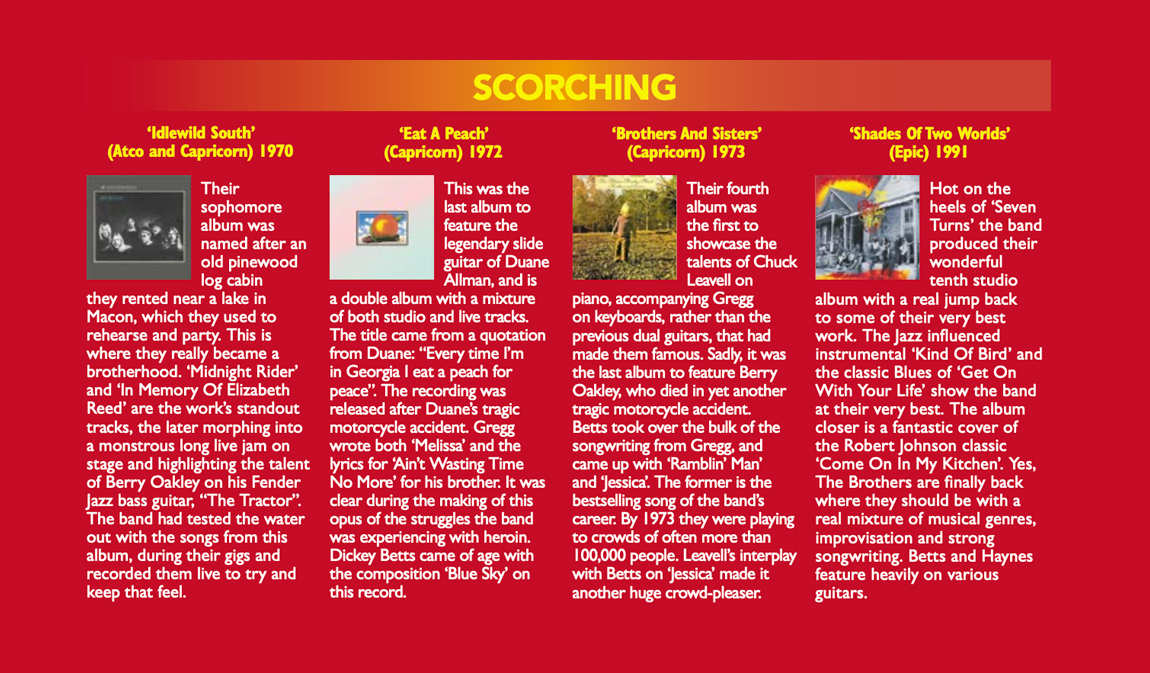 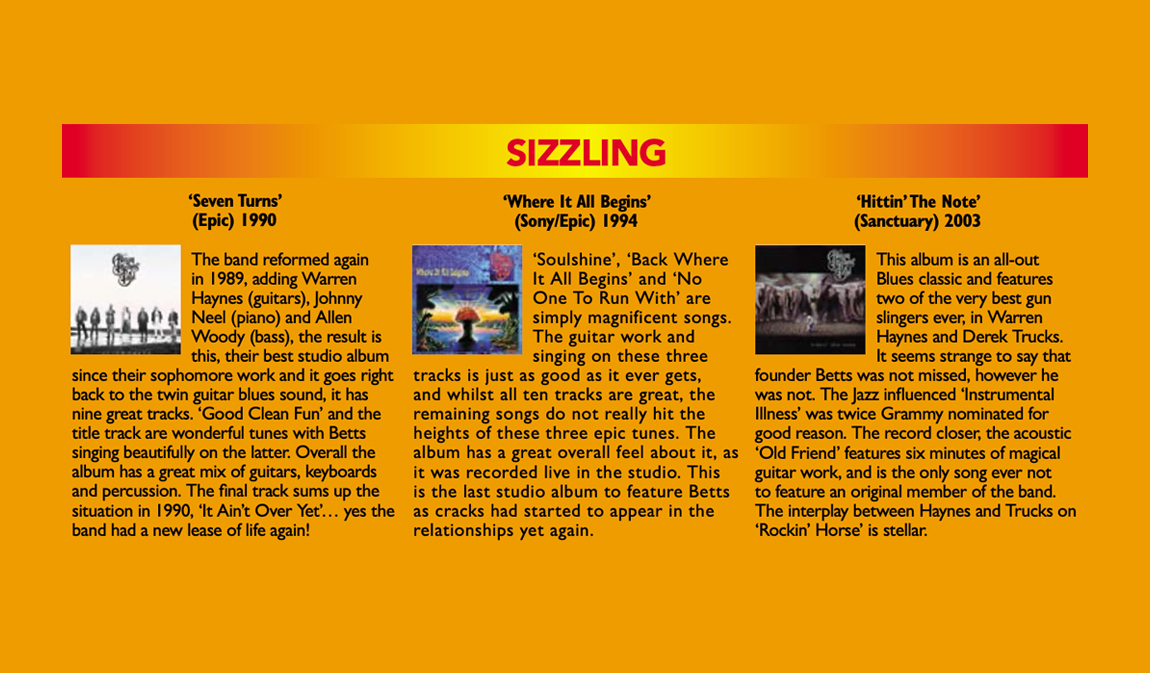 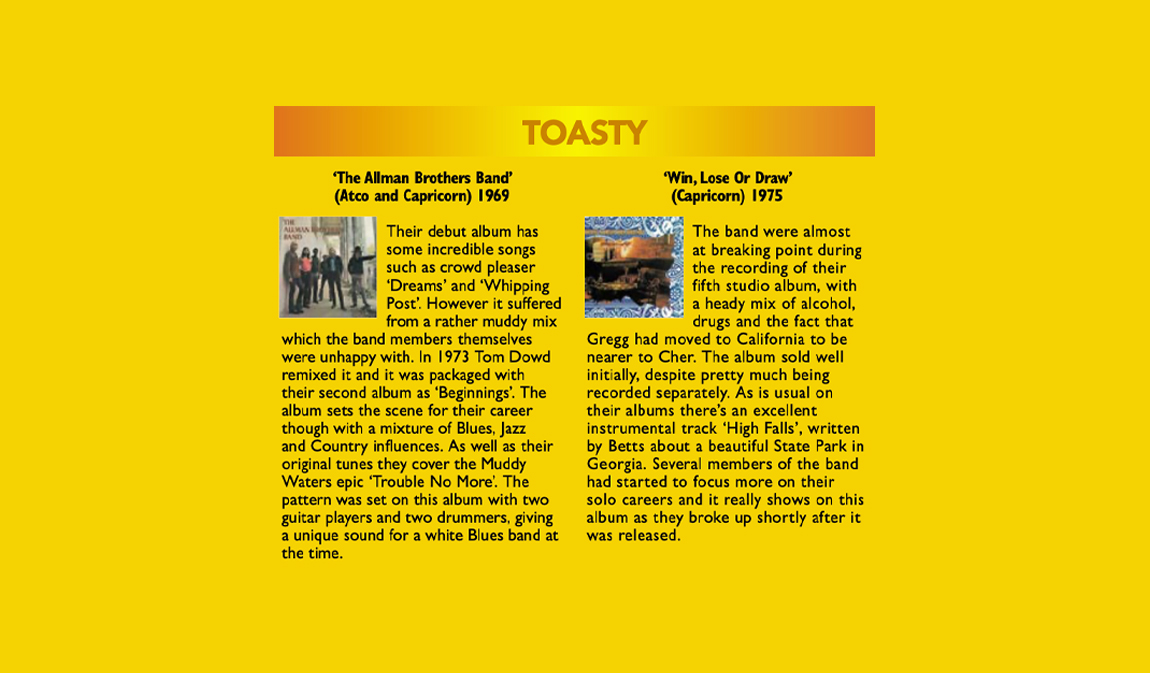 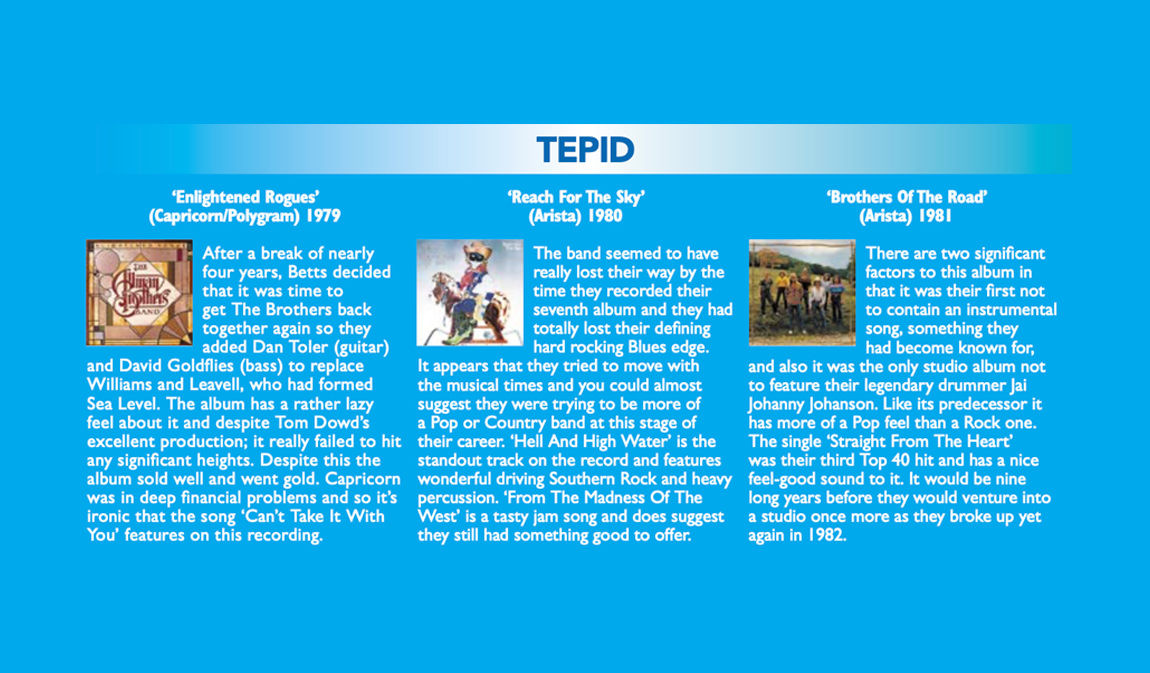 “Soulshine” (Where It All Begins)

“In Memory Of Elizabeth Reed” (At Fillmore East)

“Dreams” (An Evening With The Allman Brothers Band: First Set)

“It’s Not My Cross To Bear” (The Allman Brothers Band)

“No One To Run With” (Where It All Begins)

“Old Before My Time” (Hittin’ The Note)

“You Don’t Love Me” (At Fillmore East)

The Vinyl Countdown: Issue No 98