Wrong Side Of Paradise' is available for pre-order worldwide here.

Sam Wood, from Wayward Sons, joins the band and his first dates will be the UK shows this coming weekend in London (the band’s label Earache’s 35th Anniversary party) and Trecco Bay in South Wales for Planet Rockstock.

Ricky Warwick “I first saw Sam back in 2019 when Wayward Sons were guests to Black Star Riders and I was absolutely blown away! I had Sam join me for some Fighting Hearts dates a few months back and knew he was the guy for us. If ever there was a new GUITAR HERO waiting in the wings, then it’s Sam! Black Star Riders have had some of the World’s finest guitar players in their ranks and Sam is truly up there as one of them. We couldn’t be happier!”

The line-up for the two aforementioned shows together with the 10TH anniversary UK tour in February 2023, will see Black Star Riders welcome back guitarist Scott Gorham and original drummer Jimmy DeGrasso for the celebrations.

Ricky adds “we are really looking forward to playing with Scott and Jimmy again and this is the only time you will get to see us all together again for this 10th anniversary of the band.  After February Zak will be with us for all future dates.  The set list will be tracks from the new album “Wrong Side Of Paradise” to start the show then we welcome Scott on stage for the “greatest hits” set to celebrate our 10 years”

The 10th Anniversary UK tour takes in the following cities:

Special guests are Michael Monroe and Phil Campbell and the Bastard Sons on all shows except Belfast where Trucker Diablo open.

'Wrong Side Of Paradise' is available for pre-order worldwide here. Formats include: limited coloured vinyl (including green, blue, red and black/white split), black vinyl, signed CD, cassette and digital download. A special edition of the album containing two bonus tracks can be found on CD (which comes with a 24-page song booklet) and USB stick formats. Various collector bundles are also available, including one with an exclusive 12”.

The new single ‘Riding Out The Storm’ and music video will be released Friday December 2nd and is the first video to feature this newest member of the Black Star Riders family. 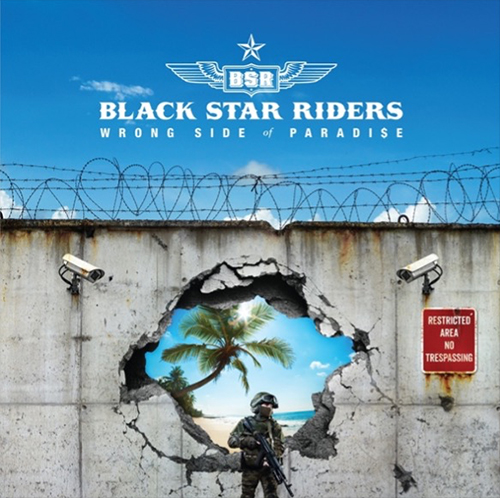 'Wrong Side Of Paradise' Tracklist