“Samantha’s masterful guitar playing spanned across multiple genres including blues, country, rock, and funk. This combined with her amazing voice, her body rocking, and head banging, and tossing around her Marilyn Monroe-style blonde locks made for a jaw-dropping experience.” – Louder Than War

Following her triumphant “Faster” UK tour in October 2022, American guitarist, and singer songwriter Samantha Fish, is pleased to announce that she will return to the UK for a 9-date UK tour in October 2023.
Planet Rock’s 48-hour ticket pre-sale starts at 9am on Wednesday 30 November via the pre-sale link at https://planetrock.gigantic.com/samantha-fish-tickets.

Tickets go on general sale at 9am on Friday 2 December at alttickets.com, gigantic.com, ticketmaster.co.uk, and samanthafish.com.
“As Samantha Fish throws her last plectrum into the audience and walks off stage, I am left mouth wide open as to what I have just witnessed. Where has the last 90 minutes gone? Can I rewind and do it all over again?” – The Rockpit

“Faster” is the follow-up to the critically acclaimed “Kill or Be Kind” album, and marks Samantha’s first collaboration with producer Martin Kierszenbaum (Lady Gaga, Sting), who co-wrote eight of the album's 12 new songs and helped the genre-defying guitarist, singer, and songwriter to re-define her sound and venture into new sonic territory.
“Striding on to the stage, dressed all in red leather this ‘Scarlet lady’ had a point to prove and she was taking no prisoners.” – Brighton & Hove News
After launching her recording career in 2009, Samantha established herself as a rising star in the contemporary blues world. The charismatic singer-guitarist-songwriter has earned a reputation as a rising guitar hero and powerful live performer, while releasing a series of acclaimed albums that have shown her restless creative spirit consistently pushing her in new, exciting, and often unexpected musical directions.

The New York Times called Fish, "An impressive blues guitarist who sings with sweet power," and "One of the genre's most promising young talents." Her hometown paper, the Kansas City Star wrote: “Samantha Fish has kicked down the door of the patriarchal blues club and displays more imagination and creativity than some blues veterans exhibit over the course of their careers."
“Samantha’s bluesy vocals entwined with stunning guitar skills makes for an intoxicating mix that ranks her high among contemporary artists." – Rock at Night
Samantha believes her musical future is an open road. "I'm never going be a traditional blues artist, because that's not who I am," she says. "But it's all the Blues for me. When Muddy Waters and Howlin' Wolf came out, what they were doing didn't sound like anything that had been done in Blues before. You've got to keep that kind of fire and spirit. I'm never going to do Muddy Waters better than Muddy Waters, so I try to be who I am, and in doing that, I find my best voice.” 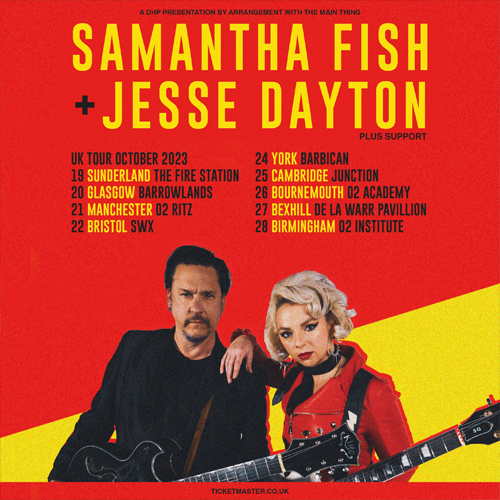