Young Culture Announce 'You Had To Be There'

New York-based pop-punk trio Young Culture have announced their new album You Had To Be There, due for release on 11th November via Rude Records (UK/EU) / Equal Vision Records (ROW).

The band have also released a video for their new single 'Kinda Over It', a song about the shadiness, back-and-forth and unnecessary headaches of a relationship that’s not quite a relationship.

Check out the video for 'Kinda Over It' here:

Stream 'Kinda Over It' here: https://youngculture.lnk.to/kindaoverit

“Young Culture have always been about making the most of your life, taking advantage of those good times, so come and do that with us. You’ll find us connecting with our pop-punk roots but with a new, refreshing aim. Short, sweet and to the point as we like to do it, but packed full of memorable moments. If you’re missing out on the YC bandwagon, sorry, I can’t explain this one to you, I guess You Had To Be There.”

Recorded in Toronto with Anton DeLost (State Champs, Silverstein, Mayday Parade), it feels like the trio - vocalist Alex Magnan and guitarists Gabe Pietrafesa and Troy Burchett - are coming down from the lovestruck high of a year ago, marked by the band’s Godspeed EP. Although similarly dramatic with catchy surges of unabashed emotion, You Had To Be There features a melancholic rush of high-octane energy with shadows that lurk within the foundations.

You Had To Be There builds on the foundations Young Culture have laid down since their formation in 2016. It’s an album that defies the 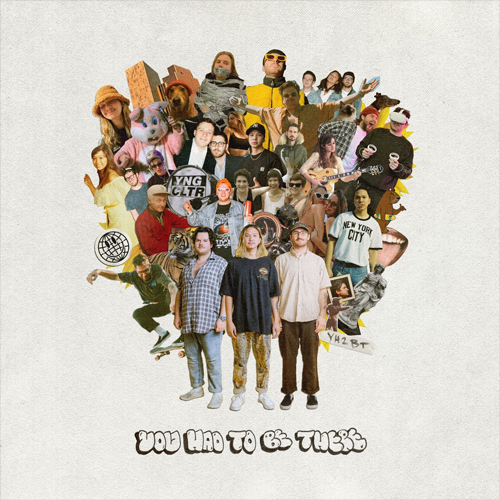 classic - and often true - notion of the difficult second record. This was anything but. What’s more, you can hear just how much freedom, joy, exuberance and fun was involved in the process of putting it all together. Due to the pandemic, Young Culture didn’t have a fair go at releasing and touring their first album, but You Had To Be There acts as another shot. It very much feels like a true stamp of Young Culture, both in terms of where they’re at now and what they want for the future.

This is a record about making the most of now, of living in the present and having as much fun as possible, whatever you or the world are going through. From the smooth and polished pop of opener 'Not In Love' and the hybrid pop-punk of 'Kinda Over It' - both songs about finding solace in the company of someone else, if only for one night - to the joyous, emphatic and triumphant strains of 'We’re On Fire' and the forlorn but still defiant nature of 'Know Better'.

Musically, it’s also an unashamed nod to all the genres and bands that the trio love. On 'Tattoo', for example, the band reference listening to Backstreet Boys, the same way they mentioned listening to Britney Spears on 'Hum'. There are no concerns whatsoever that it might not be cool within the pop-punk scene, and nor should there be. In fact, it’s precisely that unbridled passion and unfiltered enthusiasm that makes You Had To Be There stand out.

It’s done in such a way, however, that Young Culture are also looking forward to what’s next - both in the near future and the grand scheme of things - and are doing so with extra confidence. That’s something wholeheartedly reflected throughout the entire album, musically and lyrically, from the very first note to the very last.

“I really think this is something that you don’t want to miss out on,” Magnan says. “I feel like it’s the sound of us coming into our own and making a record that is the most Young Culture thing ever. We were the most excited we’ve ever been to make the music on this album.”

Young Culture have also announced a co-headline tour with Super American, as well as dates supporting State Champs during October and November. Head to the band's website for full dates and tickets: https://www.youngcultureshop.com/tour